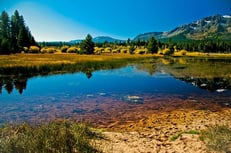 These cases triggered a series of rulemakings through which EPA and the Corps have sought to define CWA terms in ways that reconcile Supreme Court with the agencies’ policy preferences … as those preferences have varied during the Obama, Trump, and now Biden administrations. Obama and Trump era revisions were stayed by litigation (I discussed the Obama era revisions HERE, and the superseding Trump era revisions HERE). Most recently, the agencies have administered their authority applying the pre-2015 definitions.  On December 7, 2021, EPA and the Corps published proposals to revise the definitions to suit Biden administration priorities, reaffirming the pre-2015 definitions with some adjustments. The remainder of this note discusses the latest proposal.

What definitions are provided by the latest proposal?

The agencies are now proposing the following definitions:

(i) That are relatively permanent, standing or continuously flowing bodies of water with a continuous surface connection to the waters identified [elsewhere in this definition]; or

(ii) That either alone or in combination with similarly situated waters in the region, significantly affect the chemical, physical, or biological integrity of waters identified [elsewhere in this definition];

(i) That are relatively permanent, standing or continuously flowing bodies of water; or

(ii) That either alone or in combination with similarly situated waters in the region, significantly affect the chemical, physical, or biological integrity of waters identified in paragraphs (a)(1), (a)(2), or (a)(6) of this section;

(7) Wetlands adjacent to the following waters (other than waters that are themselves wetlands):

(ii) Relatively permanent, standing or continuously flowing bodies of water identified in paragraphs (a)(4) or (a)(5)(i) of this section and with a continuous surface connection to such waters; or

(8) Waste treatment systems, including treatment ponds or lagoons, designed to meet the requirements of the Clean Water Act are not waters of the United States; and

This language incorporates “navigable waters” in (1), interstate waters and wetlands in (2). Subsections (3), (5) and (7) seek to translate the Supreme Court decisions I mentioned above.

“[40 CFR 120.2(b)] Wetlands means those areas that are inundated or saturated by surface or ground water at a frequency and duration sufficient to support, and that under normal circumstances do support, a prevalence of vegetation typically adapted for life in saturated soil conditions. Wetlands generally include swamps, marshes, bogs, and similar areas.”

This definition attempts to define wetlands based on hydrology and associated lifeforms.

(1) The distance from a water of the United States;

(4) The size, density, and/or number of waters that have been determined to be similarly situated; and

(5) Climatological variables such as temperature, rainfall, and snowpack.”

This definition leaves regulators to make case-by-case determination, which is consistent with the ambiguous guidance from the Supreme Court. It supports traditional approaches in which upstream waters that might not qualify as waters of the US on their own are regulated as such because contamination or degradation would be expected to flow downstream to harm waters that do qualify on their own.

The agencies have scheduled “virtual hearings” on January 12, 13, and 18 of 2022. Comments are due by February 7, 2022. After that the agencies should move to finalize the rules, and to await the inevitable litigation.

Is my organization preparing comments on the pending proposals?