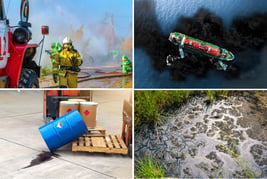 No, the title is not a stutter; I’ve written it that way to emphasize that the new Environmental Protection Agency (EPA) proposal to revise its Accidental Release Prevention (ARP) program rules under the Clean Air Act (CAA) represents only the latest step in nearly-decade-long changes to these requirements across the last three Presidential administrations. ARP was enacted after the 1990 Clean Air Act (CAA) Amendments, and its often known by its core requirement that targeted facilities prepare Risk Management Programs (RMPs) to prevent and respond to potential catastrophic releases of chemicals.

EPA’s August 31 proposal would nullify many of the narrowing amendments to RMP/ARP enacted in 2019 during the Trump Administration (I wrote about those changes HERE).

For readers who want to trace the history of these efforts, I wrote about a 2014 Obama Executive Order (HERE), prompting EPA to revise ARP requirements in January 2017 (HERE). After President Trump took office, EPA reversed course, repeatedly deferring the effective date of the Obama-era revisions while the agency reviewed them. EPA published draft re-revisions in May 2018 (HERE); in August 2018 the District of Columbia Circuit Court rescinded the deferral but effectively left EPA to continue its review (HERE). The 2019 re-revisions completed that process, which began again after President Biden took office.

The rest of this note summarizes the new proposal, comparing it to the current rules.

What are Existing ARP Program Requirements?

The 1990 CAA Amendments (Section 112(r)), directed EPA to create a program to prevent accidental releases of chemicals after which airborne plumes and or physical/thermal shock waves might produce catastrophic offsite consequences from airborne transport. EPA issued regulations in 1996. The statute and regulations received only limited revisions over the following two decades, until the current sequence of events. Generally, EPA’s rules:

What Changes did EPA Adopt in January 2017?

What Further Changes did EPA adopt in December 2019?

EPA’s “RMP Reconsideration Final Rule” accomplished the Trump Administration’s goal of rescinding most ARP/RMP newly adopted in January 2017. The only 2017-adopted provisions retained were the following:

What Changes is EPA now proposing?

The primary focus of EPS’s new proposal is to reverse the changes made in 2019, returning to the more expansive requirements adopted in 2017. In particular, EPA is now proposing the following:

- consultation of employees and their representatives on addressing, correcting, resolving, documenting, and implementing recommendations of PHAs, incident investigations, and compliance audits

Comments are due by October 31, 2022, and I anticipate EPA will proceed expeditiously to finalize the revisions. Given the longstanding controversies over this series of rulemakings, I anticipate additional litigation opposing these changes. I can’t predict how that will go.

If so, has the organization considered the impacts on its operations and compliance position under potential revisions?

Is the organization preparing comments on this proposal?