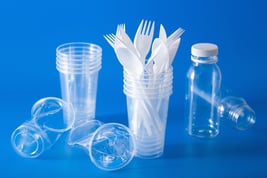 What items will be banned?

The Act specifies categories of single-use plastic items that are “covered materials”:

However, “Covered material” means both of the following:

However, “covered material” excludes a number of specified packaging products, either because they are also regulated under federal or state laws, or because (beginning in 2027) they are recycled at high enough rates:

In addition, separate requirements apply to “expanded polystyrene,” which the Act defines as “blown polystyrene and expanded or extruded foams that are thermoplastic petrochemical materials utilizing a styrene monomer and processed by any technique or techniques, including, but not limited to, fusion of polymer spheres (expandable bead polystyrene), injection molding, foam molding, and extrusion-blow molding (extruded foam polystyrene).”

What producer responsibility requirements are created?

The Act aims to phase out plastic covered materials – which it refers to as “source reduction” – and assigns producers (and sellers) of these materials a series of responsibilities and deadlines. Producers of covered material sold, offered for sale, imported, or distributed in the state must achieve each of the following with respect to the materials for which they are the producers:

What will a PRO’s producer responsibility plan include?

The state-approved PRO (or PROs) must prepare and then implement a Producer Responsibility Plan to ensure that the PRO and its members comply with applicable requirements from the Act. The plan shall include all of the following:

(2) a source reduction plan, detailing how to meet the phase-out requirements identified above

(4) objective and measurable criteria whenever possible, describing how the PRO and its members will accomplish required outcomes, including

- the collection, processing, recycling, or composting of, and the development of viable responsible end markets for materials, including collection and handling infrastructure

- budget with expenses and contributions, and fees necessary to cover them

CalRecycle is preparing to create regulations and/or guidelines to administer this new program, and CalRecycle and the targeted industries are preparing to implement the program.

Does the organization produce or use any single-use plastic items that are used in California?

Is the organization involved in recycling or source reduction activities?