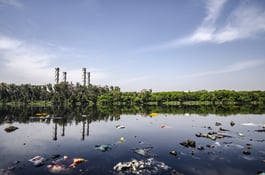 What were the facts of the case?

The County of Maui operates a sewage treatment plant, which produces 4 million gallons per day of partially treated wastewater which it discharges into four deep wells. The wastewater flows with/through groundwater approximately one-half mile to the Pacific Ocean.  In 2012 the Hawaii Wildlife Fund and other environmental groups sued the County, claiming that the discharge constitutes an unlawful “discharge” of a “pollutant” to “navigable waters,” since it occurs without a NPDES permit. The parties agreed that the wastewater would qualify as one containing “pollutants,” and that the ocean constitutes navigable waters of the U.S. (I wrote about recent changes to this definition HERE).

The case turned on the fact that the discharges are not made directly to the ocean but instead into groundwater, which flows to the ocean but does not reach it via a distinct channel or discharge point. The County argued that CWA applies only to direct discharges into navigable waters, and pointed to separate CWA provisions limiting EPA’s authority over groundwater to research and grant funding, and leaving groundwater management to states. The district court applied evidence to find that a considerable amount of the County’s wastewater reached the ocean and that a “path to the ocean is clearly ascertainable,” so that the discharge into wells was “functionally one into navigable water.”

The County appealed to the Ninth Circuit, which decided that a NPDES permit should be required when “the pollutants are fairly traceable from the point source to a navigable water such that the discharge is the functional equivalent of a discharge into navigable waters.” The County appealed to the Supreme Court, arguing a bright-line test: a discharge should only require a permit if it is the “means of delivering pollutants to navigable waters.” The federal government presented EPA’s latest guidance, seeking to exclude all discharges to groundwater as outside EPA/NPDES authority. The environmental groups incorporated the Ninth Circuit’s view, arguing that NPDES permits are required for discharges that are “fairly traceable” to a point source and a proximate cause of addition of pollutants to navigable waters.

What has the Supreme Court decided?

Justice Breyer wrote the majority opinion, joined by 5 other justices. Justice Kavanaugh wrote an additional concurring opinion highlighting several points, and Justice Thomas (joined by Justice Gorsuch) and Justice Alito dissented. The four opinions sparred over the CWA NPDES provision’s meaning of “from” in “discharge from a point source” to navigable waters.

The majority decided that limiting the term to mean only discharges directly from a source to navigable waters would create huge loopholes – pointing to a hypothetical where a discharger dumped its wastewater on a beach a few yards from the ocean – and adopted an admittedly vague definition covering “discharge from a point source into navigable waters or when there is the functional equivalent of a direct discharge.” This standard avoids loopholes such as the pipe-to-the-beach, leaving EPA and courts to decide whether particular discharges meet the standard. To assist these case-by-case analyses, Justice Breyer and the majority offered the following nonexclusive list of factors:

The decision opined that time and distance will be the most important factors in most cases, but not necessarily every case.

Having reached this conclusion, the majority saw no reason to exclude ALL discharges to groundwater that might reach navigable waters, and pointed out that including such an exclusion would create loopholes comparable to the pipe-to-the-beach example.

Since the Ninth Circuit had applied a different analysis, the Supreme Court vacated the lower court decision and remanded the case for review applying this new analysis. The dissents argued that the majority had stretched the fair meaning of CWA’s statutory language, and lamented that the resulting standard lacks a bright line and therefore will lead to more litigation in more cases to come.

This decision will set off nationwide reviews of discharges such as Maui County’s. The Ninth Circuit will review its prior decision, or further remand the case to the District Court to do so. It seems very likely that the lower court review will reinstate the requirement that Maui County seek a NPDES permit. Although not directly covered by this case, it’s clear that the Fourth Circuit view (requiring a “direct hydrological connection”) and the Sixth Circuit’s view (excluding all discharges to groundwater) are no longer viable. Neither is EPA’s recent exclusion of discharges to groundwater.

Does the organization routinely discharge wastewaters:

Are all such discharges already permitted by:

Are any non-permitted discharges subject to existing exemptions or waivers, which may be subject to review after this Supreme Court decision?

Image by Yogendra Singh from Pixabay