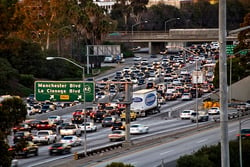 The biggest difference between Presidents Obama’s and Trump’s environmental policies relate to regulation of greenhouse gases (GHGs) that most scientists and policy-makers believe contribute to climate change – a proposition which President Trump and his appointees do not embrace. On March 15, the Environmental Protection Agency (EPA) announced its reconsideration of GHG emission standards from “light duty” vehicles such as automobiles and small trucks, for model years 2022-2025. These standards were set in 2012 by EPA, in cooperation with the (US federal) National Highway Traffic Safety Administration (NHTSA) and the California Air Resources Board (ARB). Three days before President Obama left office, on January 17, EPA reaffirmed the 2022-2025 standards, determining them to be technically and economically feasible for auto makers to meet and cost-effective for customers.

However, on March 15 the new administration reopened that decision, starting a formal review. On March 21, the California ARB voted unanimously to keep the stricter standards, which will likely set off a procedural fight if EPA’s review reaches the predicted conclusion of delaying or reversing the presently scheduled tightening of standards.

How Are Vehicle Emission Standards Set?

The Clean Air Act (CAA) addresses emissions of pollutants, but not vehicle efficiency as such. Instead, NHTSA sets national vehicle fuel economy standards for vehicle makers' fleets, under authority of the Energy Conservation Act of 1975. These include the Corporate Average Fuel Economy (CAFÉ) standards. EPA and NHTSA coordinate their rulemaking activities. EPA also generally cooperates with ARB; California began setting state standards before EPA gained national authority in 1977, and has authority to set new standards if EPA allows (formally: California sets a standard, and applies to EPA for a waiver from nationwide preemption by claiming special state-level conditions, which traditionally were related to vehicular air pollution in the Los Angeles basin but which were extended by the Obama administration to include GHG standards). In 2010, EPA and NHTSA set national standards for GHG emissions from light duty vehicles for 2012-2016, in cooperation with ARB. In 2012, they adopted standards for subsequent years in two phases, 2017-2020 (Phase 1) and 2022-2025 (Phase 2), promising a mid-term review of the Phase 2 standards. The January 2017 notice from EPA concluded that review and reaffirmed the Phase 2 standards; the March 2017 notice from EPA and NHTSA sets aside that decision and promises a new review to be concluded by April 2018. California ARB’s semi-independent standard-setting authority is not mentioned.

Readers should know that EPA always granted ARB’s petitions for waivers, until its rejection of California’s first vehicle GHG emission rules during the George W. Bush administration (California sued, and the decision eventually was reversed by the Obama administration). If EPA loosens the 2022-2025 federal standards, California will need a waiver to keep the stricter state standards, requiring the same sequence of state application, federal review and grant or denial, and lawsuit if there’s a denial.

March’s EPA/NHTSA notification indicates their plan to complete the renewed mid-term review by April 2018. Most observers expect them to relax the emission standards previously announced by the Obama administration. If they do so, I expect California to seek a waiver to enact the stricter standards under a CAA waiver – if EPA rejects that petition then litigation will ensue. While it’s too early to make a firm prediction, it seems likely that automotive GHG emission standards will not change during the next few years. And while these major uncertainties loom, auto companies must continue to make capital, equipment, and marketing decisions about what to do beginning in less than five years.