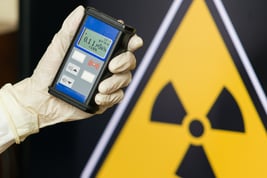 Which sources of ionizing radiation does OSHA regulate?

This Standard is modeled on regulations promulgated by the Nuclear Regulatory Commission (NRC), which has broad authority over the production and use of radioactive materials. The Standard generally follows NRC worker safety regulations (see 10 CFR 20), but provides less detailed guidance.

If a workplace contains any source of ionizing radiation stronger than thresholds specified by NRC and OSHA, it is subject to regulation. OSHA and NRC have undertaken a Memorandum of Understanding, under which OSHA generally defers regulation of sources of ionizing radiation and exposures to these materials to NRC at workplaces subject to NRC regulation. In turn, most states enforce NRC requirements under formal agreements with NRC (“Agreement States”). Because of these deferrals, the employer must determine which agency regulates this activity. In general, NRC/states regulates the following:

An employer should know if any of its workplaces holds an NRC/state license.

If a workplace has any source that exceeds applicable radiation source levels, and is not regulated by NRC or an Agreement State, the workplace is subject to OSHA requirements. OSHA’s Ionizing Radiation Standard requires some or all of the following:

Employers should remain attentive to these requirements, and continue to parse and distinguish OSHA and NRC regulatory requirements.

Has the organization developed and implemented workplace information and safety programs in any workplace area that meets the definition of: