EPA to decide whether discarded PVC is hazardous waste 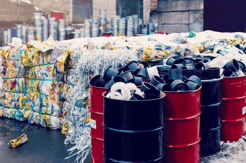 On May 4, 2022, the US Environmental Protection Agency (EPA) published notice of a proposed consent decree in litigation brought by the environmental group Center for Biological Diversity (CBD). EPA proposes to issue a decision responding to a petition filed by CBD in 2014, about whether to list discarded polyvinyl chloride (PVC) as hazardous waste under the Resource Conservation and Recovery Act (RCRA). CBD filed the suit early in 2021, after EPA had taken no action on its petition for seven years, claiming that the agency’s inaction violated a duty to act. EPA is now ready to commit to issue a proposed decision no later than January 20, 2023, and a final decision by April 12, 2024.


What hazards do discarded PVCs present?

Polyvinyl chloride (PVC; also referred to as “vinyl”) is the world's third-most widely produced synthetic polymer of plastic, and about 40 million tons are produced each year. It is produced by polymerizing vinyl chloride. As summarized by the American Chemistry Council (ACC), PVC is manufactured and used in rigid form (e.g., industrial pipes), in pliable form (e.g., as plastic wrap), and in thin and flexible form (e.g., as wallcovering). PVC is incorporated in a wide variety of household and commercial goods, including clothing, consumer packaging, building materials, electronics, and children’s toys. ACC reports that ¾ of PVCs are used in building materials.

PVC products, and particularly wastes, contain vinyl chloride (regulated by the Occupational Safety and Health Administration (OSHA)) as a carcinogen, and other chemical additives, such as phthalate plasticizers. Plastic wastes are also persistent in the environment, and “microplastics” are being addressed with increasing urgency (I wrote about California’s new Statewide Microplastics Strategy HERE).

What would RCRA listing mean?

Listing could be based on any of these factors, as appropriate. EPA would also define management requirements covering the identified hazardous wastes, and would likely issue additional guidance.

EPA’s notice asks for comments by June 3, 2022. After that date, EPA and CBD are likely to ask the court to finalize the consent decree. Assuming the court does so, EPA should move forward to meet its commitments during 2023-2024.

Readers should note that in April 2021 Canada added “plastic manufactured items” to the list of “toxic substances” promulgated under the Canadian Environmental Protection Act.

Does the organization produce or use materials or items made with PVC?