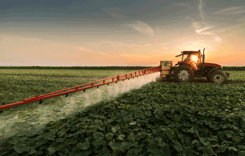 What is glyphosate and how is it used?

Glyphosate is a broad-spectrum weed killer. As summarized in the latest court decision:

“During its first two decades on the market, Roundup had limited utility to farmers because it killed all vegetation in an application area. But in the mid-1990s, Monsanto developed a “Roundup Ready” crop system, selling Roundup along with seeds genetically modified to tolerate glyphosate. The system allowed farmers to apply glyphosate over genetically modified crops, killing weeds but leaving the crops unharmed.”

Roundup has been the highest-selling pesticide in the US. Although Monsanto genetically modified crops to resist glyphosate, other species remain potentially subject to harm, including not just unaltered plants but also bees and perhaps humans. In recent years, a series of lawsuits have involved claims that exposure to Roundup harmed the plaintiffs; on June 21 the US Supreme Court denied review of a decision in one such case assessing $25 million in damages against Monsanto in a case claiming that exposure to Roundup caused plaintiff’s cancer (Hardeman v. Monsanto Company).

What’s the recent regulatory and litigation history of Glyphosate?

EPA first registered glyphosate as a pesticide ingredient under FIFRA in 1974, and has conducted several formal reviews during the intervening decades. The current cycle began in 2009, when EPA commenced a (re)registration review. In 2015, EPA determined that glyphosate may pose certain risks to mammals and birds and may adversely affect terrestrial and aquatic plants, primarily from spray drift. At that time, EPA issued a draft human-health risk assessment and a paper about glyphosate’s carcinogenic potential, concluding that glyphosate posed no serious human-health risks and should be classified as “not likely to be carcinogenic to humans.”

In January 2020, EPA issued an Interim Registration Review Decision, which:

To reach these conclusions, EPA reviewed a variety of studies, including one in which the International Agency for Research on Cancer (IARC) concluded that glyphosate is a probable human carcinogen, and instead found that the chemical is neither carcinogenic nor an endocrine disruptor. EPA found minimal ecological risks to animals.

Two groups petitioned for review of EPA’s Interim Decision: one led by the Rural Coalition, and the other by Natural Resources Defense Council (“NRDC”). Rural Coalition challenged EPA’s conclusions on human health and insisted that EPA should have followed ESA’s procedural requirements before issuing the Interim Decision. NRDC’s challenged EPA’s ecological risk assessment, cost-benefit analysis, and risk-mitigation requirements. The court consolidated the petitions for review, and allowed Monsanto to intervene as an interested party.

What has the Ninth Circuit decided?

Because of the statutory deadline in FIFRA, EPA must complete its review by October 2022. Assuming the agency meets this deadline, further regulatory clarity will appear soon – although litigation will certainly follow any determination that does not include significant additional restrictions or even revocation of registration.

Does the organization manufacture, sell, or use glyphosate or glyphosate-using pesticides such as roundup?