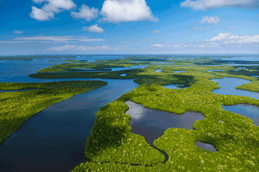 The federal Council on Environmental Quality (CEQ) has revised its regulations administering the National Environmental Policy Act (NEPA) of 1969. NEPA requires federal agencies to assess the environmental effects of their proposed actions, and incorporate this information into their decisions. Government-wide guidance is provided by the White House’s CEQ, established by NEPA and appointed by the President. CEQ issues formal regulations that agencies must follow, and guidance documents that provide additional advice. CEQ also reviews agencies’ NEPA implementation programs, and publishes annual national Environmental Quality Reports.

During President Trump’s administration, CEQ issued significant revisions to its NEPA regulations; these were cast as moves to “modernize” the rules but included a number of important revisions narrowing their scope and applicability. These revisions were finalized in July 2020 (effective in September), with only minor changes from proposed revisions issued in January 2020 (which I wrote about HERE).

After taking office, President Biden directed CEQ and other agencies to review regulatory amendments during the Trump Administration, and to prepare to re-revise them as appropriate to the new administration’s legal and policy perspectives. On October 7, 2021, CEQ published a “Phase 1 Notice of Proposed Rulemaking” as a first step to restoring NEPA provisions to their pre-2020 form, seeking comments on its proposal (I wrote about the proposal HERE). On April 20, 2022 CEQ finalized these proposed changes. The remainder of this note discusses these latest revisions.

What do CEQ rules require?

NEPA was enacted over 50 years ago to create “a national policy which will encourage productive and enjoyable harmony between man and his environment to promote efforts which will prevent or eliminate damage to the environment and biosphere and stimulate the health and welfare of man; [and] to enrich the understanding of the ecological systems and natural resources important to the Nation.” NEPA provides for procedures to ensure appropriate analyses and decision-making, and public information about these efforts. NEPA also created CEQ. CEQ issued regulations in 1978 (40 CFR parts 1500 – 1508), and also issues additional guidance documents.  Court decisions have also shaped interpretations and procedures.

CEQ’s 2020 revisions provided a wide variety of substantive, technical and editorial changes (my January 2020 blog organizes these revisions by regulatory “part” number in the 1500-1508 sequence). CEQ has now finalized revisions to the first group of those changes (“Phase 1”). Specifically, CEQ proposed three revisions to the 2020 NEPA Regulations, which it has now adopted:

These “Phase 1” changes are effective May 20, 2022. They reflect the present administration’s preference for extensive reviews that include systemic effects such as climate change.

In addition, CEQ has reaffirmed that it is developing a Phase 2 rulemaking to propose comprehensive revisions to the 2020 regulations, and will issue a second proposed rule for notice and public comment.

Is the organization subject to specific federal agency policies, programs, rulemakings, or permit processes subject to NEPA review before relevant decisions can be made?

If so, are there ways to improve those reviews by adjusting NEPA regulations and guidance?

If so, is the organization participating in CEQ’s regulatory process by offering comments, or by reviewing comments submitted by others?