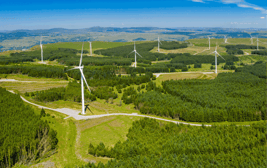 On November 10, the Biden Administration announced a proposal to amend the Federal Acquisition Regulation (FAR) to require “major federal suppliers” and “significant federal suppliers” to disclose their greenhouse gas (GHG) emissions and assessments of climate-related risks, and to set targets for GHG emission reductions. The rest of this note summarizes this proposal.

What is the Federal Acquisition Regulation?

The US federal government describes itself as the world's single largest buyer of goods and services—purchasing over $630 billion in the last fiscal year. The FAR presents over 2000 pages of policies and procedures that (executive branch) federal agencies are to follow when acquiring products or services using Congressionally appropriated funds. These rules are issued under the joint authorities of the Administrator of General Services Administration (GSA), the Defense Department (DOD), and the National Aeronautics and Space Administration (NASA); the Office of Management and Budget (OMB) Office of Federal Procurement Policy provides oversight.

The proposal defines these types of contractors, and their required actions.

Which contractors would be covered by the latest proposal?

For purposes of this proposal:

Which GHG emissions and activities must be disclosed?

Subject contractors will be required to calculate and disclose their emissions of all of the following GHGs: carbon dioxide, methane, nitrous oxide, hydrofluorocarbons, perfluorocarbons, nitrogen trifluoride, and sulfur hexafluoride.

Beginning 1 year after this proposal is finalized, major and significant federal contractors must do the following annually

Beginning 2 years after this proposal is finalized, major federal contractors must also do the following annually

Subject contractors must also certify these reports and submissions.

Written comments are due by January 13, 2023. After that date, the agencies (GSA, DOD and NASA) are expected to move to finalize the requirements. Because this is an administrative action, it is unlikely that Congress will interfere. If the organization qualifies as a “significant” or “major” federal contractor – or is seeking to become one by pursuing federal contracts – it will be required to comply with final requirements in order to qualify for federal contracts. Even if the organization is not directly subject to these requirements, if they are adopted they will reinforce stakeholder expectations that similar GHG accounting and management are underway.

Does the organization contract to provide the US federal government with good and services, subject to requirements of the Federal Acquisition Regulation?

Does the organization contract to provide the US federal government with:

Does the organization do each or any of the following annually:

Is the organization tracking the FAR rulemaking discussed in this note?