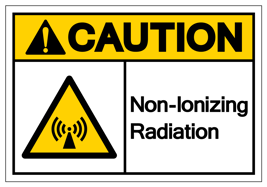 What non-ionizing radiation does OSHA regulate?

OSHA regulates employee exposure to what it refers to as “non-ionizing” radiation, which does not contain enough energy to ionize biologically important atoms in a worker’s body (this is “ionizing” radiation), but may pose a hazard because it generates heat in exposed skin and internal tissue.  The non-ionizing radiation standard covers “electromagnetic radiation,” which OSHA defines to include radio and microwave frequency emissions.

This Standard covers electromagnetic radiation originating from radio stations, radar equipment, and other possible sources of electromagnetic radiation such as those used for communication, radio navigation, and industrial and scientific purposes. Although the Standard does not provide additional details, OSHA’s Safety and Health Topic webpage for non-ionizing radiation provides a listing of common types and sources:

The Standard does not apply to the deliberate exposure of patients by, or under the direction of, practitioners of the healing arts.

What must employers do to protect employees from exposures to non-ionizing radiation?

The Standard requires employer actions to protect potentially-exposed employees. Readers should note that the Standard does not explicitly require an employer to survey the workplace to identify locations where non-ionizing radiation exposures may occur.

In work areas where workers may be exposed to non-ionizing radiation, the employer must post a radio frequency radiation warning symbol.  This sign is a red isosceles triangle above an inverted black isosceles triangle, separated and outlined by an aluminum color border.  The words:

appear in the upper triangle.

The employer may add additional warning information and/or precautionary instructions, in the lower triangle of the warning symbol.

The Standard does not require employers to limit access to exposure areas, but OSHA has established maximum exposure levels, which it refers to as the Radiation Protection Guide (Guide).  For normal environmental conditions the limit for exposure to electromagnetic energy of frequencies from 10 megahertz (MHz) to 100 gigahertz (GHz), the Guide is 10 milliwatt per square centimeter (mW/cm2), as averaged over any possible six-minute period.

This exposure level may be reached either of the following ways:

These thresholds apply whether the radiation is continuous or intermittent, and apply to both whole body and partial body irradiation.  Non-ionizing radiation of these strengths may be generated by radio transmitters, radar transmitters, microwave relays, and high-voltage electrical wires.

The Standard states that the Radiation Protection Guide “should not be exceeded without careful consideration of the reasons for doing so.” OSHA does not provide guidance for compliance with this vague directive.

Employers should remain attentive to these requirements, as they call for useful injury prevention efforts.

Has the organization identified workplace non-ionizing radiation hazards, including from:

Does the organization post required warning signs in workplace locations where non-ionizing radiation hazards may be present?

Does the organization provide training to potentially exposed employees?

Does the organization survey each workplace periodically to ensure that all relevant hazards are identified and managed?