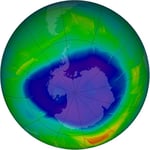 Late in the 1970s, measurements in the stratosphere revealed that levels of ozone were falling – the headline summary of this trend was the annual appearance of a thinned-out “ozone hole” over the Arctic and Antarctic regions. Health and environmental and human health scientists worried because stratospheric ozone is an important absorber of potentially damaging ultraviolet radiation (bad for penguins under the ozone hole, and eventually bad for humans on the rest of the planet). Further studies concluded that the culprits were halocarbon chemicals used as refrigerants, solvents, propellants, and foam-blowing agents. Dubbed “ozone depleting substances (ODSs)”, these chemicals (including chlorofluorocarbons (CFCs), halogenated chlorofluorocarbons (HCFCs), freons and halons) are relatively non-reactive when released on the surface, so they persist in the atmosphere long enough to drift up to the stratosphere where incoming solar radiation eventually powers their reaction with ozone.

By 1987, international reaction to this potential disaster produced the Montreal Protocol on Substances that Deplete the Ozone Layer (Montreal Protocol), which established an international framework for protecting the earth’s stratospheric ozone layer, by identifying ODSs and steadily phasing out their production and use (starting with those with highest ozone depleting potential and moving on to successively less potent chemicals). I posted a summary of the Montreal Protocol and U.S activities under Title VI of the Clean Air Act here.

As we approach the thirtieth anniversary of Montreal, this approach appears to be working. In September 2014 the United Nations Environmental Programme reported that concentrations of most ODSs were declining, and that total concentrations of chlorine- and bromine-containing substances had declined by 10-15% since promulgation of the protocol (UNEP, Assessment for Decision-Makers – Scientific Assessment of Ozone Depletion: 2014). In this report, the UN projects that ozone levels will recover by about 2050. In June 2016 the journal Science published a report that data from the Antarctic finally show that the seasonal “ozone hole” is shrinking.

Although Montreal Protocol goals are on track, interest in ODSs is actually increasing again. That’s because many ODSs also qualify as greenhouse gases (GHGs), so that accelerated reduction in their manufacture and use should help mitigate climate change. During 2016, the parties to the Montreal Protocol are pursuing efforts to further accelerate reductions in HFC use. In June 2016 U.S. President Obama and Indian Prime Minister Modi announced a bilateral agreement to support those efforts. If these efforts bear fruit, it will represent global efforts to extend a successful international program to support another program that is still struggling to accomplish its goals.

Does the organization manufacture or import any ODS subject to the Montreal Protocol and/or CAA Title VI?


Where Do I Go For More Information?