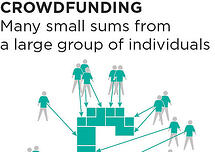 Have you ever "crowdfunded?" On October 23, the Securities and Exchange Commission (SEC) proposed regulations that may expand your opportunity to do so…

In this increasingly popular fundraising mechanism, people with creative ideas post proposals on dedicated websites (such as Kickstarter for creative projects). People intrigued by the project provide contributions, and typically receive acknowledgements and perhaps suitable gratuities (tickets to the movie, copies of the game, etc.).

A few websites have pushed these efforts closer to traditional small-cap investing—for example the Mosaic website facilitates investments in financing for solar energy projects. But these efforts have been limited by provisions of federal securities laws designed to protect investors ... although those limitations are changing.

The 2012 Jumpstart Our Business Startups (JOBS) Act revises federal securities laws to allow small companies to grow before having to register securities or stage an initial public offering (IPO). Title III adopts a new Section 4A into the 1933 Securities Act, outlining a new crowdfunding exemption from requirements to register securities, for qualifying U.S.-based companies in compliance with the following conditions:

SEC was to have published these regulations by December 2012, but is running late. Despite the delay, SEC's new proposal hews close to the lines established by the JOBS Act and other registration and exemption provisions in the federal securities acts.

SEC’s proposal repeats the requirements noted above, specifying that the issuing company disclose the following basic information about the company and the offering:

Most of the new details to be found in SEC’s proposal involve requirements for SEC-registered third party intermediary – either a broker-dealer or a newly-defined “funding portal.” SEC also proposes to require that intermediaries conduct these transactions exclusively through online platforms. They also must meet investor information and protection goals by doing the following:

Conversely, the proposed rules would prohibit funding portals from all of the following:

SEC's proposal copies the limits on investment set forth above, in total amounts and relative to their assets. Investors generally cannot sell these shares for at least a year.

These rules are only proposals, so nobody can rely on them yet. However, SEC is moving to finalize them next year, so it’s not too early to start making contingency plans. Consider the following:

Does my organization anticipate raising investment funds by selling securities?

If the organization is considering raising no more than $1 million per year, has it reviewed “crowdfunding” provisions of the JOBS Act, and SEC’s proposed rules?

Am I an investor, interested in investing in non-public companies?


Specialty Technical Publishers (STP) provides a variety of publications intended to facilitate clients’ understanding of and compliance with regulations. These include:

Jon Elliott is President of Touchstone Environmental and has been a major contributor to STP’s product range for over 25 years. He was involved in developing 16 existing products, including Securities Law: A Guide to the 1933 and 1934 Acts and their Amendments, including Sarbanes-Oxley and Dodd-Frank and Directors' and Officers' Liability.