Energy companies have used hydraulic fracturing—often referred to as ‘fracking’—since the 1940s in order to enhance recovery of oil and natural gas from low-permeability (“tight”) rock formations. 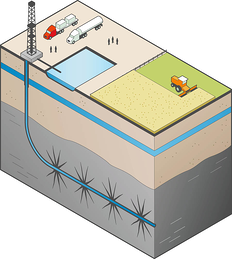 Frackers pump high-pressure fluids into rock formations to create and expand cracks and create pathways for valuable hydrocarbons to flow out.  The stimulant fluids are usually water-based, with additional chemicals (acids, surfactants, biocides, etc.) to improve the effectiveness of the fracking process as well as solid ‘proppants’, which prop open the expanded openings (sand, etc.).

Within the U.S., state regulation of extraction wells has sometimes included provisions to regulate fracking, and federal (GHG EPA,) and state environmental and worker safety regulations, have addressed the issue of exposures and wastes. These regulations have included a general prohibition against direct discharge of spent and recovered fluids into surface waters, which has led operators to reinject these fluids into subsurface formations, or ship them off for contamination management.

Why is fracking suddenly a big issue?

Recently, improving field techniques and rising energy prices are transforming this small but stable field into a potentially huge one – with accompanying attention and controversies.  On one side, some energy companies believe that the use of fracking and enhanced horizontal drilling techniques can allow extraction of trillions of cubic feet of gas and billions of barrels of oil.  On the other, environmental groups fear extensive air and water pollution from mismanaged liquids and gases, seismic disturbances from fractured geologic formations, onsite and offsite health risks from chemical contamination, and the increased GHG (greenhouse gas emissions) further contributes to climate change.

Between these two camps, other professionals from industry, environmental organizations and/or government agencies are working to clarify questions and narrow areas of concern.  For example, the Ground Water Protection Council and the Interstate Oil and Gas Compact Commission have created the FracFocus website, where hundreds of drilling companies report the constituents contained in the stimulant fluids and proppants they use in fracking – an important counterpoint to a highly-publicized refusal by some drillers to disclose this information. As another example, in late 2011 the (multiparty) Shale Gas Production Subcommittee of the Secretary of Energy Advisory Board published a significant report to the Department of Energy recommending specific steps to include the management and reporting of fracking activities.

What regulatory developments are underway?

Without pre-judging the strategic decisions about energy production and the climate, regulators throughout the country are reviewing existing regulations and crafting new ones.  These regulatory efforts include the following:

• Clean Water Act (CWA; and states) – In March 2011, the EPA reiterated the longstanding ban on direct discharges of fluids to surface waters, but in November 2011 announced plans to proposed a rule that would cover wastewater discharges from shale gas extraction (which covers fracking) by 2014.

• Clean Air Act (CAA; and states) -  In April 2012, the EPA signed “Oil and Natural Gas Sector: New Source Performance Standards and National Emission Standards for Hazardous Air Pollutants Reviews,” which is currently under administrative review before publication in the Federal Register.  These include the first federal air standards for hydraulically fractured natural gas wells.  In addition, EPA’s Mandatory Greenhouse Gas Reporting Rules include “Petroleum and Natural Gas Systems,” which deals with the reporting of emissions associated with fracking.  EPA issued these provisions in November 2010, revised them twice, and also proposed further revisions in May 2012.

• Bureau of Land Management (BLM) – In May 2012, BLM proposed rules regulating fracking on public and Indian lands, with comments due by September.  The proposed requirements are consistent with the American Petroleum Institute’s (API’s) 2001 Hydraulic Fracturing Operations guidelines.

• States – A handful of states have updated rules governing wells, and others continue to review their rules.  Revised rules generally follow the same API guidelines.  However, some states are instead considering complete bans on fracking. Vermont adopted the first such ban in May 2012.

With all these initiatives underway, it’s impossible to predict exactly what revised rules will govern fracking, or the extent to which governmental rules will even allow these activities to proceed.  But the general scope of applicable questions can be framed now to some extent, using the following checklist.

-  Proposed locations/depths and volumes of fluids to be injected

-  Resource development in general, and fracking operations in particular?

-   Wastewater management, including subsurface injection and any surface     management?

-   Management of other wastes?

-   Worker protection and the right-to-know at worksites

Jon Elliott is President of Touchstone Environmental and has been a major contributor to STP’s product range for over 25 years. He was involved in developing 16 existing products, and writes quarterly updates including, U.S. Federal Mandatory Greenhouse Gas Emissions Reporting Audit Protocol.