After more than 50 years, OSHA proposes newer and more flexible standards for forklifts 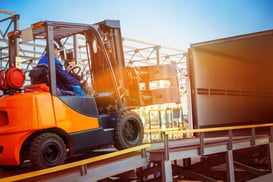 The Occupational Safety and Health Administration (OSHA) has proposed revisions to its Powered Industrial Trucks Standard – more often referred to as the “Forklift Standard” since those are the most common types (29 CFR section 1910.178 (general industry) and 1926.602 (construction)). OSHA first adopted the standard in 1971, and most recently revised it in 2017. However, as discussed below, OSHA has never updated the Standard’s principal technical standards during more than half a century. The remainder of this note summarizes the existing requirements, and identifies proposed revisions.

How does OSHA present the Standard’s requirements?

Provisions of this Standard cover the following:

Many of OSHA’s design and construction provisions are expressed as requirements that equipment meet standards in voluntary consensus standards promulgated by professional organizations including the American National Standards Institute (ANSI) and the National Fire Protection Association (NFPA). OSHA incorporates these third-party standards by reference, citing them in its standards. The Standard requires that all trucks bear a label indicating approval by a nationally-recognized testing laboratory.

Importantly, the primary cross-reference hasn’t changed since OSHA first adopted the Forklift standard in 1971, so it still refences the 1969 edition of ANSI’s National Standard for Powered Industrial Trucks (B56.1-1969). However, OSHA administrative policies allow employers to follow successor editions, by treating an employer’s use of equipment that meets such successor editions as a “de minimis” violation of its requirement that doesn’t impinge on workplace safety .

What units are subject to this Standard?

This Standard covers a variety of vehicles in most workplaces. It regulates the following vehicles:

However, it DOES NOT regulate the following vehicles:

The Standard designates 11 general classes of industrial trucks and tractors, which are assigned different design and construction standards, as well as eligibility to work in different conditions (particularly those with hazardous atmospheres). These classes consist of three types of diesel-powered units, four types of electrically-powered units, two types of gasoline-powered units, and two types of liquefied petroleum gas (LPG)-powered units.

What changes is OSHA proposing?

OSHA’s primary proposed revision is to update the Standard’s reference to the ANSI B56 standard to reflect the latest edition – including recognition that the 1969 standard has been split into several related standards in subsequent editions, and that ANSI now co-publishes them with the Industrial Truck Standards Development Foundation (ITSDF):

These new cross-references will apply beginning 30 days after OSHA finalizes these proposed regulations. Forklifts put into service after that date must meet the new standards (which will, of course, continue to evolve).

Second, OSHA is addressing the administrative issue inherent in treating employers’ use of later equipment as nominal violations of the Standard, even if the equipment meets subsequent standards that are at least as protective. OSHA is now proposing to establish a formal performance standard: if an employer can demonstrate that a unit is “at least as protective” as one that meets the formal requirements. As a practical matter, unit manufacturers attest to the specifications used in design and construction, so employers’ compliance with this alternative should be easy.

OSHA’s proposal asks for written comments by May 17, 2022, after which I assume OSHA will move to finalize the changes. Assuming this happens, OSHA will have crossed half a century in which actual standards in the field have evolved without recognition from the agency. Furthermore, adding a formal way for employers to self-certify the safety of their units as alternatives in the marketplace continue to change, will eliminate the illogical use of 'de minimis' violations.

Does the organization operate any equipment subject to the Powered Industrial Trucks Standard issued by OSHA (or a similar standard from a delegated State Plan State)?

Is the organization providing comments to OSHA in this matter?