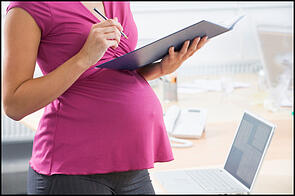 io: A female employee informs you she’s pregnant, and you recall that one of her previous pregnancies ended in miscarriage, so you decide to transfer her to a less demanding assignment at the same pay grade. The pregnant employee objects on the grounds that the new assignment is less interesting, and carries lower prestige.

If you then ordered this employee to accept the transfer, you could possibly find yourself in court, as the County Sheriff’s Office did in Hillsborough, Florida. You might also be found guilty of pregnancy discrimination in violation of federal and state law, and ordered to compensate her with back pay, as well as pay additional damages for inflicting emotional distress on the woman you thought you were helping. This spring the Eleventh Circuit Court of Appeals did just that, affirming a jury verdict awarding $80,000 in back pay plus $10,000 compensation for emotional distress, based on prevailing employment law, and pregnancy discrimination.

What did the employer do wrong, and why?

The case is Holland v. Gee.[i]  Lisa Holland had worked for three years as a data processing telecommunications technician (DP Tech) in the Sheriff’s Office, where David Gee was the County Sheriff.  In November 2006, three years after joining the Office, Holland disclosed her pregnancy to her supervisor, Teresa Sterns.  Sterns later testified:

‘I’ve thought about this quite a bit, and I’m sure that part of my decision was that as a mother, with knowing the history of her miscarriage, knowing how my pregnancy was rather difficult, I — I can only assume that part of that decision was that I felt it was — it was to be nice and to give Lisa a desk job. Concerned [sic] with her pregnancy was part of my reasoning. It was not the official reasoning, but it was certainly part of what I felt was — was right.’

At trial, several co-workers testified that the Help Desk tasks are less technical and more administrative, involving telephone conversation, rather than on-site visits. Accordingly, some of the Help Desk DP Techs had lower pay grades than that of Ms. Holland, and at least one co-worker testified that he would have considered such a transfer to be a demotion.

Ms. Holland objected to the move but was transferred anyway; she was eventually terminated for what the Sheriff characterized as performance and morale issues.

The Court opinion relates a range of conflicting testimony about who said what, who did or didn’t do what, and the reasons for what occurred. Throughout the case the Sheriff’s Office denied any discriminatory intent, and offered its own testimony to contend that each decision was based on reasons that were non-discriminatory. However, management employees offered differing recollections of what had transpired, and why. In fact some of them changed their stories during the course of the investigation, trial, and court appeal.

What did the federal court decide, and why?

This case was tried in federal court under Title VII of the Civil Rights Act of 1964 (which prohibits a wide range of workplace discrimination, including discrimination “based on sex”), under the federal Pregnancy Discrimination Act of 1978, and under comparable Florida state law.

Because there was no clear written evidence of discrimination, the trial court followed precedent for dealing with the circumstantial evidence.  It reviewed the plaintiff’s initial ‘prima facie’ case arguments, followed by the defendant’s counter-arguments, in order to determine if it was even possible that discrimination had occurred. In this case, neither side won at the preliminary stage, as both sides presented extensive testimony, and both cross-examined opposing witnesses vigorously. The trial judge decided that neither side had provided enough evidence to win as a matter of law, and let the matter go to a jury to decide.

The jury believed and agreed with plaintiff Ms. Holland’s arguments that discrimination occurred.  The trial judge denied motions by the defendant, the Sheriff’s Office, and on appeal the Eleventh Circuit upheld these determinations.

In upholding the jury’s decision the Eleventh Circuit cited back to the U.S. Supreme Court’s 1991 pregnancy discrimination decision in International Union v. Johnson Controls.  In that landmark decision, the Supreme Court found that based on employment law and pregnancy discrimination, the employer’s “fetal protection policy” discriminated against pregnant and “fertile” females by denying them work in its battery assembly areas, presumably to prevent their exposure to lead. In that decision, the court found the employer’s policy was motivated at least in part by a desire to avoid the costs of exposure-reducing measures in the workplace. In the current case, the Eleventh Circuit did not dispute that the Sheriff’s Office motivations might be “benign,” but did reaffirm the Supreme Court’s observation that “[c]oncern for a woman’s existing or potential offspring historically has been the excuse for denying women equal employment opportunities.”

Implications of the court’s decision on pregnancy discrimination

The Holland v. Gee decision reaffirms that employers cannot change working conditions for pregnant employees, even if the decision is based on a belief that these employees need safer or easier working conditions. Instead, this Court decision reaffirms decades of precedent requiring that the workplace must generally be safe for all employees. The decision does not reach the equally important point that the employee may have the right to request such an accommodation, particularly if that individual’s pregnancy produces a temporary disability that triggers the Americans with Disabilities Act.

What will you do?

- If so, does the policy affirm the organization’s willingness to offer appropriate accommodations to qualified employees with a disability, including temporary disability (which can occur during pregnancy, or during or after serious illnesses)?

Does my organization provide training to supervisors and managers in legal duties regarding employment law to avoid discrimination, and do the organization’s policies comply with these duties and procedures to ensure compliance?

Jon Elliott is President of Touchstone Environmental and has been a major contributor to STP’s product range for over 25 years. He was involved in developing 16 existing products, and writes quarterly updates for them all. Go to the STP Publishers website for a copy of his book, Workplace Violence Prevention: A Practical Guide.