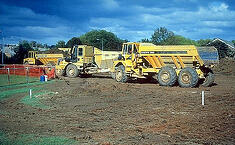 In a rulemaking published in the May 24, 2013 Federal Register, EPA added nine new Superfund Sites to their National Priorities Lists (NPL), bringing to 1,320 the total number of uncontrolled hazardous waste sites now listed on the NPL. Superfund, the more common name for CERCLA, was promulgated in 1980s to identify and clean up hazardous wastes sites and to identify the parties responsible for causing the contamination with the intent that they bear the expense of remediation. The NPL started with 400 sites, and over four decades later, while 365 NPL sites have been delisted and 75 partial deletions have occurred at 58 additional sites, EPA continues to identify sites requiring remediation to eliminate the risks to human health and the environment and Superfund is still being funded at over $1.1 billion annually.

EPA’s Office of Radiation and Indoor Air (ORIA) is responsible for protecting the public and the environment from the risks of radiation and indoor air pollution. ORIA develops criteria, standards, guidance, policies, and programs to limit unnecessary radiation exposure, including Naturally Occurring Radiological Materials (NORM), and control exposure to indoor air pollutants. One such NORM, radon, is a particular concern in the Environmental Assessment Process, as it is a real danger, but considered a non-scope item when conducting a Phase I ESA. The EPA and the World Health Organization estimate that radon is the number two cause of lung cancer among non-smokers and the second leading cause of lung cancer overall. EPA provides comprehensive information on radon, including a map of radon zones and listing of state radon contacts at www.epa.gov/radon/index.html.

STP has recently released an update to Site Auditing: Environmental Assessment of Property and also produces the following publication:

Current information about the NPL and status of listed and delisted sites can be found here.